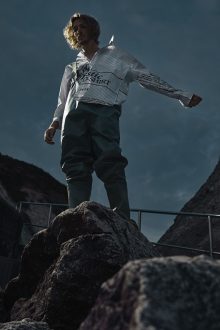 Warhola is the solo moniker of Oliver Symons, a musical multi-talent excelling in writing and producing his music from start to finish. But he also has somewhat of a Midas’ touch in other endeavors: with the band Bazart he’s currently selling out arena’s in Belgium and clubs all over the Netherlands (think The Postal Service meets Yeasayer, only with Dutch vocals), and he’s co-produced more than a few up-and-coming acts.

Though it’s clearly the mind-bending electronic production of Warhola, topped with lush, fantastic vocals, where Oliver really comes into his own.

2016’s ‘Aura’ EP, featuring debut single ‘Unravel’ and follow-up ‘Lady’, was released to humongous critical acclaim. “A dark but brilliant piece of electronic-soul” said HillyDilly, “Soaring, propulsive, and atmospheric in equal measure” applauded Pigeons and Planes. ‘Lady’, which sounds like the intro is played by Symons’ personal orchestra of ghosts, was dubbed “classic pop melodrama played out over frosty and emotionally-charged synth music” by Complex.

Now back with ‘Jewels’, Warhola is making his claim on the dancefloor. Combined with the visuals of acclaimed DOP and photographer Nicolas Karakatzanis (who shot the Oscar nominated feature film ‘Bullhead’ and ‘The Drop’, starring Tom Hardy and James Gandolfini), rather than adapting his universe to the dancefloor, he is making it entirely his own with a signature and hauntingly brilliant twist.