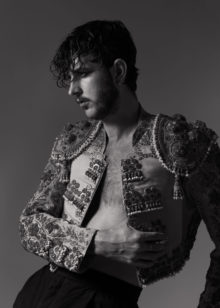 oscar and the wolf

In the three years since his debut album emerged, Oscar and The Wolf has gone onto become a superstar back home in Belgium who sells out 20,000 capacity venues and closed last year’s Pukkelpop festival performing above the likes of Rihanna and LCD Soundsystem. He’s also making waves across Europe headlining arenas from Amsterdam to Istanbul as well as major festivals including performing on stage right before Muse at 2016’s Lowlands festival. Surrounded by a crowd and lashings of pyrotechnics, Oscar and the Wolf always rises to the occasion. Adored by the fashion world he was also commissioned by globally renowned designer dries van noten to create the soundtrack to 2015’s spring/summer collection at his Paris Fashion Week show.

Now he’s preparing to expand his fanbase further with new album, Infinity, which he wrote after a year of intense self-exploration. “I’ve never made such an eclectic collection of songs, and it’s turned out that way because I’ve had kind of a dramatic year,” he says with a knowing hint of understatement. “But actually I think drama can be a good thing. I don’t try to win over the fact that I’m feeling dark or blue – I try to dive into it as deep as I can, until I find something interesting in there. That’s where the music comes from.”

At the heart of Oscar and the Wolf lies a dichotomy. Max Colombie chose this evocative stage name because it captures the two sides of his personality and of his music. “I wanted a name that offered the perfect contrast between darkness and light,” he explains. “Oscar is poetic – it represents the side of me that’s a daydreamer. But the wolf is an animal that howls at the moon, so it symbolizes the loneliness that’s inside me.”

This rich contrast permeates every single Oscar and the Wolf song, explaining, “I never want to make songs that are only sad or only happy”. Initially, the Smiths were a significant influence, but now his R&B-flecked electro-pop noir can be inspired by anything from a Calvin Harris banger to a Connan Mockasin psych jam. “I think of my songs as almost like Disney music for adults. They have lots of sexual and over-the-top elements that maybe aren’t suited to children! But I want to break through the social construction of this idea that there’s music you’re ‘supposed’ to make. I don’t believe in this line between alternative and commercial music – even classical pieces are like pop music to me. And I think there’s a real beauty in the EDM sound.”